We’re gearing up for a digital banking upgrade on Oct. 18, and to ensure no requests are interrupted during the update, members will temporarily be unable to add Bill Pay payees or link external accounts between Oct. 3-18. We're sorry for the inconvenience.

Ever noticed how much easier it is to fall out of shape than to get into shape?

The same can be said (albeit the exact opposite) about getting into (too easy) and out of (pretty hard) debt. There are many ways to dig out of debt—some extreme and unlikely, like winning the lottery or inheriting a pile of money. Chances are pretty low that either of those events will happen in our lifetimes. More realistic is getting a big raise or consolidating. (Moving all your debts into a SELCO home-equity line of credit (HELOC) is one example of consolidation.) 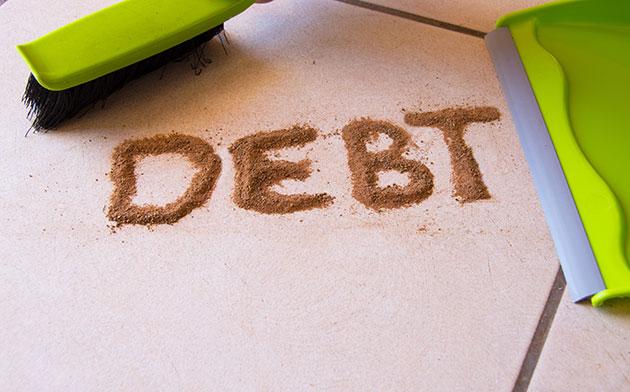 And then there are these two efficient, logical methods—the debt snowball (popularized by personal finance advisor/radio host Dave Ramsey) and debt avalanche. Both focus on paying off one debt at a time, which social scientists agree is most effective. Let’s compare the two. One of them may just set you on the path to financial freedom.

As the name implies, the debt snowball involves building up to the largest debt. Say you have three outstanding loans (minus a mortgage):

First, list your debts in order from lowest to largest balance and tally up what you normally send to these debts each month. Next, jot down the minimum payments for all three. Finally, look at your budget and determine where you can cut back a bit. Any leftover cash in your budget, along with the difference between the minimum payments and what you'd normally send to your other debts, would now go toward your car payment. You're potentially sending hundreds of dollars extra to your smallest debt now, which will speed things up considerably. The snowball may require patience, however, as you will only send minimum payments to your other debts until it’s their turn in the snowball. Once the car loan is paid off, move on to the next-highest balance by rolling your entire car payment into your credit-card payment. And so on until the debt disappears.

You might be tempted to tackle the higher balances first—especially since your credit card carries such a high interest rate. The snowball is more rooted in emotion, however. Watching your smallest balance dwindle each month is a small victory in itself. These repeated small wins will give you the motivation to keep going.

In this scenario, the interest rates roll downhill. Using the balances above, start with your $15,000 credit-card debt at 17.99%. Again, tally up your normal payments as well as the minimum payments for each debt. Then devote the difference between those two amounts (or whatever falls within your budget) to your minimum monthly credit-card payment.

In this example, you may need to tweak the avalanche a bit since the next-highest interest-rate debt, your student loan, also has by far the largest balance. Regardless of how you play it, the debt avalanche greatly reduces your interest payments.

Depending on how motivated you’re still feeling at the end, you can always snowball or avalanche all that extra money into your mortgage. How cool would it be to know your house could be paid off several years quicker?

There you have it. If playing the lottery over and over just isn’t panning out, consider taking the debt snowball or debt avalanche for a spin (or try a combination of the two). You’ll be debt-free before you know it.

Keep Your Investments on Track While Weathering the Inflation Storm

There are many forces working against us right now. Inflation, gas prices, and stock market woes have made investing a big challenge. But it’s wise to stick to a long-term plan while being frugal in the moment to weather the storm.

Owning a boat is a major commitment. Best to know what's in store before deciding what you're buying, when you're buying it, and how you're financing.

Is It a Good Time to Take the Homebuying Plunge?

The price of homes continues to set records. Bidding wars send the final price tag even higher. Mortgage interest rates have creeped back up. So, does buying a home now still make financial sense?